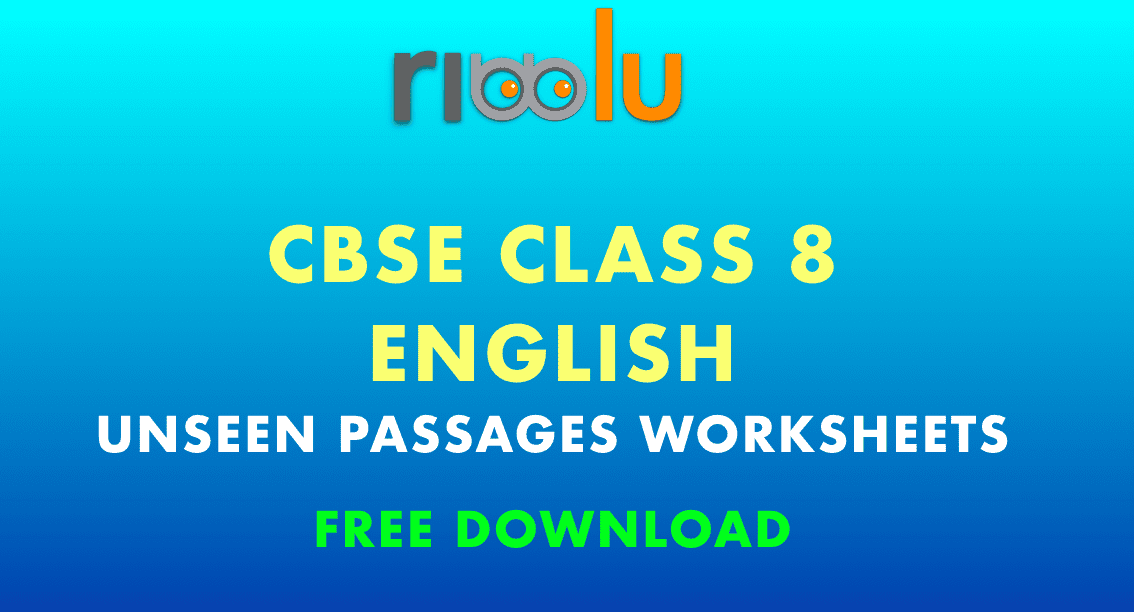 For Students of Class 8 in CBSE affiliated schools, Unseen passages is an integral part of English paper and students need to have lots of practice to get the knack of how to solve these reading comprehensions perfectly in less time and score high marks.In this blog, we will provide you with various Unseen Passages for CBSE Class 8 Activities and Worksheets, to make it easier for you as a student to prepare Reading section of final exam paper.Read on to find out.

UNSEEN PASSAGE FOR CLASS 8 WITH QUESTIONS – 1

Read the passage carefully and answer the questions given below.

Carrier pigeons can be trained to carry messages to people. The note is placed into a small thin can. The can is tied to the pigeon’s leg. Then the pigeon flies off to deliver the note. Carrier pigeons are good messengers because they are fast and can fly long distances. They also have a good sense of direction. They can even reach places that people that are not able to.

From high up in the sky, specially trained can spot orange life jackets in the ocean. Sometimes it s difficult for humans to spot people lost at sea, especially when the weather is bad. However, pigeon’s can fly quickly over a large area of water in search of people.

In 2006, a group of scientists used pigeons to study air pollution in California. Special backpacks with miniature cell phones were strapped onto pigeons. As the pigeons flew, machines in the backpacks tested to see the type of gases in the air. The cell phones sent information about the air to the scientists.So next time you see a pigeon, stop and watch it closely. What might look like an ordinary bird to most people might actually be a hard-working mail carrier, a scientist, a lifeguard or even a spy!

1. How do pigeons carry messages ?

3. Complete the sentence given below-

which were strapped on to pigeons.

5. Find word/phrase from the passage which mean the same as:

UNSEEN PASSAGE FOR CLASS 8 WITH QUESTIONS – 2

Read this report passage carefully and answer the questions given below.

Eating ice cream really does make you happy. Scientists have found that a spoonful of ice cream lights up the same pleasure center in the brain as winning a contest of listening to you favourite music. Neuro-scientists in London scanned the brains of people eating vanilla ice cream. They found an immediate effect on parts of brain known to activate when people enjoy themselves. The scientists used advanced technology to watch blood flowing to activate brain areas when people swallow ice cream.

Don Darling of Unilever said, ‘This is the first time that we have been able to show that ice-cream makes you happy. Just one spoonful lights up the happy zones of the brain in clinical trials.’

3. How did the scientists use advanced technology?

4. How much ice-cream is needed to make one happy?

7. Find words from the passage which mean the same as:

UNSEEN PASSAGE FOR CLASS 8 WITH QUESTIONS – 3

Read the passage carefully and answer the questions given below. (10)

Tintin is the name of a famous European comic strip hero. Tintin was created by the Belgian cartoonist Herge (the pen name of Georges Prosper Remi). Tintin is a reporter. The comic strip follows his many adventures throughout the world. Some of the stories have elements of mystery, science, fiction and fantasy.

However, they all contain humor.

Tintin’s pet fox terrier, Snowy, accompanies him on his adventures. His other companions include the bad-tempered Captian Haddock, Professor Calculus, and the bumbling detectives Thomson and Thomson.

Tintin first appeared in a story published in a children’s supplement to a Belgian newspaper in January 1929. The strips were collected into an ‘album’ called Tintin in the Land of Soviets (1930). Herge published 23 Tintin albums up to 1976. A 24th album, titled Tintin and Alpha-Art, was unfinished at the time of Herge’s death in 1983.

The Tintin comic strip has been enourmously popular throughout Europe and other parts of the world. It has influenced many European cartoonists. The character’s adventure led to a Tintin magazine. The stories have been adapted from motion pictures, radio, television, and the stage. The American film director Steven Spielberg directed the animated movie The Adventures of Tintin (2011)